One important item on the agenda was the formal adoption of Chris Alexander as our next Club Chair.

Many members of Arsenal Scotland will already know much about Chris for his long-time work as the Ticket Officer for Arsenal’s Away matches. Some might even recall his playing days 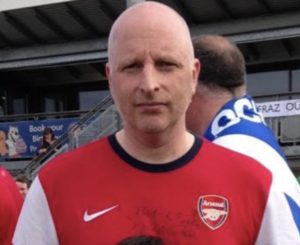 Chris was the outright choice in the online Ballot of the membership which was closed on June 4th. Of the four candidates standing in an election, he received 54% of the vote on the first round. This was twice as many votes as the next candidate, providing Chris with a strong vote of confidence from the membership.

More details from the Club AGM will follow later.

The full report of the election is with members of the Management Committee. Contact your Regional Rep if you wish to know more. A total of 115 valid votes were cast in the online Ballot on behalf of the membership between 23rd May and Saturday 4th June 2022. This participation by the membership is a much greater than the number ever attending an AGM at which voting has generally taken place.

It was further agreed by the Management Committee that there was a need for a Vice Chair. Linda Collie, having polled second place in the election, was invited to this non- executive post. Happily Linda has agreed to be Arsenal Scotland’s Vice Chair.