And so it was for the upcoming Home Match scheduled for October 1st 2022: The Ticket Team secured 6 tickets, but with 36 requests from Members we had to hold a Ballot.

The following shows the names of Club Members requesting a Match Ticket for Arsenal vs Tottenham, listed in the order they were selected at random in the Ballot. 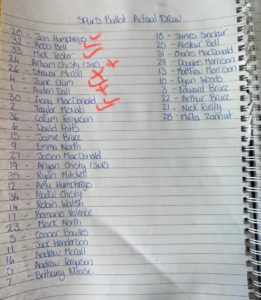 All those indicated in red were contacted by the Club in the drawn order and offered a ticket; there were 3 refusals (shown as X) during the 9 offers made. A red tick indicates that the Member as been allocated one of the six (6) match tickets sourced by Arsenal Scotland.

The draw was carried out (and recorded) via Zoom by Management Committee Members Angie Kidd and Liam Finn witnessed by myself as Club Secretary at 1.00pm on Sunday September 11th.

Angie listed randomised the names of all 36 Members who had made a request, as shown below. 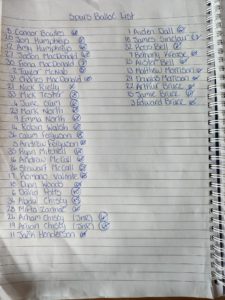 Independently Liam drew out the 36 numbers at random to determine the order Members would be offered tickets: that outcome is shown in the first image.

The Totts tickets are now sold.